Smokers account for a sizable proportion of those facing incarceration. With smoking being an inmate’s first desire for stress relief, it’s understandable that they’d be upset by a new tobacco ban. Things that people are allowed to do in the free world are considered illegal in prison and will result in disciplinary action if caught.

Tobacco use is prohibited in the majority of U.S. prisons and by the Federal Bureau of Prisons. This ban applies to all nicotine products, including chew, e-cigarettes, cigarettes, and cigars. Since the use of nicotine has been prohibited, lighters and matches have also been prohibited. Nicotine is classified as a drug because it is addictive.

Although smokers may be irritated and frustrated at first, the fact that cigarettes are no longer available provides them with the simplest way to quit smoking. The decision to ban tobacco products in prison was made for health reasons, just as it is in the free world, but this does not prevent inmates from obtaining them if they desire them. 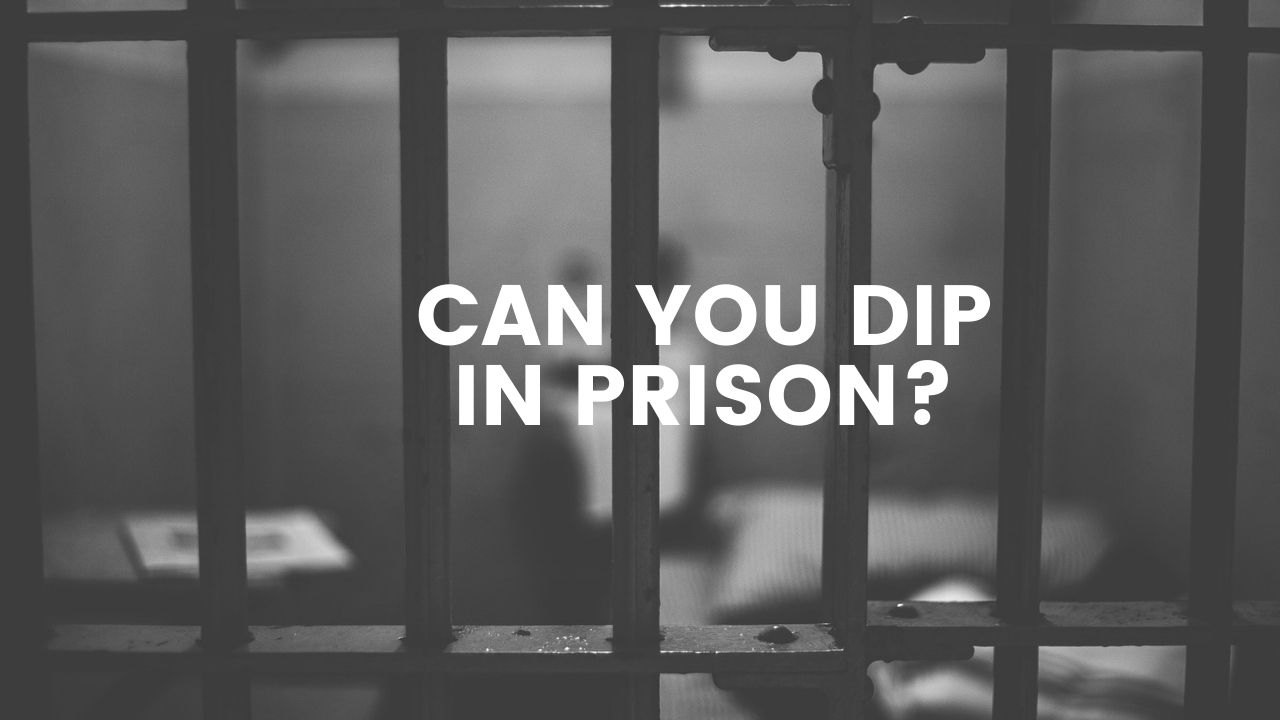 Dipping tobacco and chewing tobacco are smokeless tobacco products that are used in various ways. Dip is inserted between the lower lip and the outer gums of the mouth. Chew, on the other hand, is placed between the gum and the cheek.

Dipping tobacco is a moistened, shredded tobacco product. It contains the same amount of nicotine and other cancer-causing substances as cigarettes. While smokeless tobacco may have slightly fewer health risks than smoking cigarettes, it is far from safe. Dip, like smoking tobacco and its associated health risks, can cause gum disease, tooth decay, and tooth loss.

The Federal Bureau of Prisons officially changed the regulations regarding tobacco use in prison in 2006; however, prisons and jails increased tobacco use restrictions in the mid-1980s. They removed tobacco from prison commissaries and enacted policies prohibiting smoking and the possession of tobacco-related products, except for religious or spiritual purposes.

According to public health officials, an estimated 60 to 80 percent of prison inmates were smokers, which is an alarming number given that most prison facilities lack proper ventilation, exposing nonsmokers to large amounts of secondhand smoke.

The rules and regulations regarding tobacco use in nation-state prisons vary. While a few states are 100% tobacco-free, others still permit smoking outdoors. Each state has its own guidelines for tobacco use; however, most comply with the lead of the Federal Bureau of Prisons.

At the end of 2019, there were an expected 23 states that have banned tobacco use completely, at the same time, as 27 states started imposing stricter regulations. The states that are listed as being 100% tobacco-free in 2020 are:

Can You Use Tobacco in Prison?

Tobacco use in prison was once not only acceptable but also common among inmates. Even movies and television shows will show an inmate smoking a cigarette or exchanging packs of cigarettes for other goods in prison.

Tobacco use is an essential part of prison life and culture, as well as a way to relieve stress, socialize, and as a symbol of freedom. The decision to indulge or not to indulge is one aspect over which an inmate still has control. Many prisons have seen an increase in prison fights, riots, and social rebellion since the implementation of a tobacco ban.

There is a brand new standard for obtaining tobacco that is absolutely revolting. It’s the repurposing of spit. Inmates are locating the cans or bottles used by correction officers to spit in. Inmates are taking tobacco-infused spit, drying it out, and rolling cigarettes with it.

Tobacco products will be obtained by inmates in any way possible. Many of these practices are not only unsanitary but also dangerous. The use of someone else’s tobacco allows bacteria and viruses to enter the body. Because gangs or corrections officers control the distribution of tobacco products, it increases the likelihood of a potentially dangerous interaction with them.

Are tobacco-free policies in prisons bringing about problems?

Absolutely, this is the answer to this question. Tobacco bans, according to the Tobacco Control Legal Consortium, have resulted in the prevalence of tobacco contraband and a tobacco black market. This has the potential to destabilize a prison.

It’s really just economics. When cigarettes are prohibited in prisons, they can sell them for up to $20 per cigarette and charge an absurd amount of $200-300 per pack. This increases the opportunity for gangs to make a lot of money in the prison system. The gangs already have networks in place to smuggle in various items, but nothing compares to the profit potential of cigarettes.

Another aspect of the tobacco ban is that it has created an additional source of corruption among prison employees. Some correction officers don’t mind smuggling cigarettes or dip because they can make a quantifiable amount of money and it isn’t an illegal item in the world, but a guard or other prison employee who is caught smuggling it in could face charges or termination.

Inmates who are caught with tobacco products or smoking face sanctions such as loss of visiting privileges, commissary, telephone time, and possible segregation. The most significant issue that has arisen as a result of the ban is the need for underground racketeers.

The function of tobacco in the prison economy

There is a legitimate and illicit economy in prison systems. The legitimate economy system includes work and educational programs. The work program will add funds to an inmate’s account that can be used to purchase items for the commissary, such as snacks and hygiene products. However, for many inmates, the opportunities to earn income, and the goods that are offered through commissary are not desirable.

Traditionally, tobacco was used as a form of currency for inmates. It was an exchange method used by inmates to receive goods or services that they were not usually able to afford. Since the tobacco-free ban, various black-market types of opportunities have developed.

Discipline and Punishment of Inmates

The rules are clearly defined for every inmate that enters the prison system. They are rules that are in place for approved conduct that can affect security and good housekeeping.

An inmate that breaks the rules or guidelines that have been set forth by the prisons does not have all the rights that are typically present during a criminal prosecution. They are not entitled to an attorney at disciplinary hearings.

Inmates will be given written notice of the charges against them, the rules they violated, and the penalties for these infractions. The disciplinary hearing is conducted by prison officials who will decide what privileges are going to be withheld. Inmates can lose the privilege of having visitors, earning wages, or form purchasing commissary for minor infractions.

The most common type of punishment for more serious infractions or repeat infractions is segregation. Each prison system has its own system for different degrees of segregation. Inmates cannot be denied basic fundamental rights is prison and segregation is not considered to be unconstitutional.

Smoking bans in prisons resulted in a significant reduction in smoking-related deaths; however, the ban has resulted in an increase in tobacco-related contraband and riots. The number of inmates who have been caught with tobacco products or who are in danger because they owe another inmate has increased exponentially.

Inmates will frequently accept the risk of punishment for violating a prison’s rules and regulations in exchange for a small amount of freedom in deciding whether or not to use tobacco.

With all of this in mind, it makes sense to have tobacco-use policies and regulations in both state and federal prisons. It is reasonable to believe that allowing inmates to use tobacco products in a designated area would eliminate the need for underground operations, putting an end to the riots and dangerous situations caused by a tobacco-free ban.